Awards December is what it’s going to be instead of Party December by the looks of it this year. December used to be a very busy time for event photographers with most large corporate organizations having a professional events photographer to cover their Christmas party.

But this tradition seems to have changed a bit in recent years with the advent of photo booths and 3D video stalls. Unless you want to go down that route as a photographer the number of parties that need general coverage is down. It’s all fashion and will no doubt turn again in future.

So what has been high on my schedule this month? I’m very lucky that as well as general corporate work, portraiture, case study and PR work I also get a lot of event work and this month has seen the Awards season coming to the fore.

For example, The British Empire medal investitures that are held every six months at the Tower of London were a particularly large batch this year with the presentations taking towards two hours. It’s a lovely event where you get to hear the stories of lots of worthy people who have put time and effort into helping their communities or a particular cause and are recognized for their efforts. 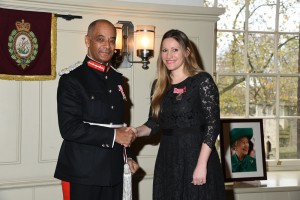 It’s a good experience to share the day with them and help make the occasion that little bit more special providing a professional coverage of the event. And of course it can be profitable to a photographer who takes pictures that clients want to buy.

I’ve also been up to Nottingham for another major Government organization for an awards ceremony that recognized outstanding service within their organization. It’s good to see employers valuing their staff in this way. After all we all like to be recognized for having done a good job and it isn’t always about the money.

Next month I’m off to the London Boat show to cover yet another awards ceremony and after party there. So you could say the Award season is in full swing.

So what does a good Award photographer need to successfully cover an event? First obviously exact knowledge of how the event is going to be staged. Briefing the compare or award presenter to turn the winners towards the camera is essential.

Second an understanding of lighting is also critical. Many award ceremonies happen with a screen behind with changing projections on. This is fine if it is back projection of the imagery where one only has to allow for the exposure of the screen. But at some smaller events it can be a front projection used and this can be a nightmare for the unskilled or reportage style photographer who likes to shoot with all natural light.

The end result of a natural light shot in these situations can often be either an award winner or presenter with text across their faces! In these situations a well balanced fill in flash will solve the problem. But it takes an experienced eye to first notice the problem in a fast changing situation and know how to solve it.

The venue and staging above all else probably dictates how an award ceremony will run. Is there stairs on both sides of a stage? A lectern for the presenter separate from where the winner may be receiving their award from a VIP. 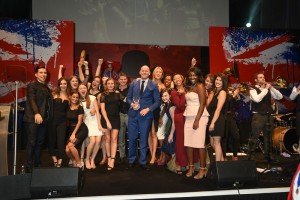 But even the best laid plans can go astray. The rowdy group of marketing executive winners that invade the stage as a team 30 strong is one example I can think of. Or the winner who is given an award or trophy, a personal medal and a certificate all at once and has no hands left to shake hands with the VIP or drops something. I’ve even seen cups that fall apart before they even leave the stage!

So if you are organizing an award event here’s a few quick tips to remember:

Awards ceremonies can be fun. The winners are normally happy to have been acknowledged for their achievements. Unfortunately shyness sometimes overcome people in these situations. So make sure your presenter or VIP is good at putting people at the ease. So if you find yourself one day up on that stage with an award in your hand remember to smile at the photographer – you’ll like the picture better in the end!