5 Points of a good PR brief to an image maker.

5 Points of a good PR brief to an image maker.

Giving a good PR brief for a stills image is harder than many people realise. Even some long term professionals in the PR business get it wrong. So be very careful when you assign the task to a junior member of staff as you potentially multiply the chances of error by a squared ratio.

For those of you with a limited time to read this article skip to the end to see the main points of a good brief. For those interested in detail carry on reading the in depth examination of a good and bad brief.

The problem comes about because we all have preconceived ideas of any given situation. For example if I say “watching a football match” some people will immediately imagine a league cup game with huge crowds watching from the terraces. While others will imagine standing on the touchline at their kids Sunday league club match on a windy common.

It gets even more complicated when we are asked to produce positive PR imagery for a campaign that many people might have negative preconceptions about. Blood donation for example. I have been contracted to the NHS Blood and Transplant service for many years and often have to shoot blood donation sessions.

The concept needed to be portrayed in imagery is a happy, easy, situation with no needles showing and the staff kind and sociable to the donors needs in a clean and modern environment. Ideally images should concentrate on the relationship between donor and blood technician with a clean and non-distracting background.

This is what the client wants, this concept might well be what the PR company wants, it’s even what the image maker probably wants!

So when a date is set for a photographer or video team to go and cover the next available donor session because there is time constraints on a campaign and the photographer turns up to a local village hall with donor chairs crammed in side by side, the cages that carry the equipment dominating one corner of the room and the waiting area a section in front of a black painted stage area with dowdy curtains the reality and the aims are worlds apart. 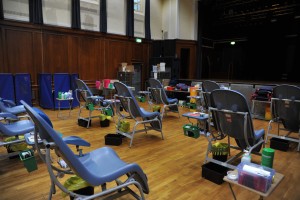 I pick this scenario particularly because government departments don’t like to do fake shots, they like to do images of real patients and real situations so the ideals and the reality seldom match.

PR people tend to be good with words, after all, much of their training and primary roll is to get the words out there in public, to give the clients message in the best light. The trouble is many people who are good with words think in words where as an image maker is more likely to think in images.

I’ll give you an example. A few years ago I won a contract to photograph the annual report for the Foreign Office, a government department here in the UK. It involved travel to China, Pakistan, Nigeria and Turkey. It was important to cover each destination with as many usable shots as possible for a number of different interest groups in the department. I ended up in a meeting with about 15 people representing different groups all with different goals and uses for those images all trying to give me their brief.

The worst thing was no one had experience of having been to any of the locations or what we would find there and the main PR person had a requirement for a document that needed positive images that she could only describe with mood words. “We need environmentally friendly images that illustrate the positive aspects of our work”. “We need images to illustrate our green credentials”. Were the sort of brief I was getting.

They had the concept they wanted to display but when pushed to describe what sort of image they expected to get from an Embassy abroad to illustrate this concept they had no practical suggestions. That person didn’t think in pictures they only thought in words and concepts.

So giving a brief to an image maker where you aren’t going to be present at the location is fraught with dangers. You might have a concept you want to portray or you might even have an image in your head of what you are expecting to receive after the event but conveying those ideas to a third person isn’t always easy. This is what was said and this is what was meant isn’t always the same thing.

Just to confirm, in both the above situations I’ve come back with images the client wanted and in the case of the Blood donation people I’m now in my 10th year of contract which has been renewed after five because of their satisfaction with my work. So I’m quite good at asking the right questions to get into someone’s head.

Giving another example where things didn’t go quite so well, a few years back I was recommended to a PR company and given my first job where I went out accompanied by a designer. We worked together on the shots at a location, him telling me what he would like to see and me not only covering that but also adding my own embellishments and creative input. He was a happy man and I was on the books for future work.

The very next job was one he couldn’t attend so he briefed me over the phone. The scenario was an image to illustrate different groups involved in security relating to the London Train network. I would be meeting at a given station location, representatives from 3-4 interested groups in station security including, London Transport Police, Station Management and security construction representatives would be present. At a set time a police helicopter would fly by and my brief was to get these representatives by a security fence with the helicopter in the background.

My first question was did he want all the representatives facing camera as a group shot to camera. No it had to look like a working meeting. At this point I felt I knew what the imagery should contain. In my head I had two to three people talking in a group, maybe some paperwork in hand with fence behind that easily showed it was a railway line behind it and a helicopter hovering low and large in the background. I thought this was what the designer had in mind also.

The reality of the situation is the PR company’s client turn up with about 8 people, two transport police officers, three contractors just in suits and station management representatives with no distinguishing different attire.

I wasn’t over happy about using everyone but the client’s representative organised everyone to be in the shot. The helicopter appeared hovering about half a mile away for probably no more than a minute and then buggered off!

In relation to a group of 10 people it was about the size of a pea. I knew as soon as I started shooting this wasn’t going to work as I’d imagined it. I quickly changed lenses and got some close up shots of the helicopter as it circled round the location. I knew with those in the bag I could drop them in and even enlarge them into any of the shots. 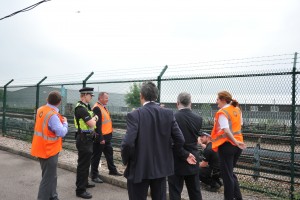 The spec high on the left is the helicopter!

When the helicopter had gone I shot some more angles of the group the client had presented to me, high, low, over shoulders, getting the Police signs on the back of the officers. Then to cover myself I shot it with a much smaller group at a different fence position getting some trains in the background as well. I thought I’d got all the elements covered. 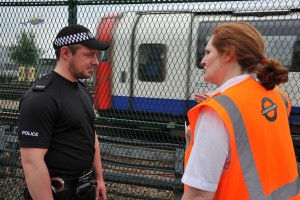 All the important Elements comped to cover the brief.

An alternative version that tells the story

To this day I don’t know whether my clients client didn’t like the shot or the designer had had an image in his head that was nothing like the reality but presenting the elements before comping them together didn’t get great approval.

It seemed that the designers understanding of “not to camera poses” and mine were two different things. Where I had taken that to mean I could creatively utilise people’s backs and the police signage he hadn’t imagined anything but frontal imagery of the group. He wanted them all facing camera.

This is a perfect example of a concept in someone’s head and the words spoken didn’t convey the meaning meant. Our terms of reference were different. And isn’t that today the problem is=n so many conflicts in the world!

So, what’s the best way to give a good PR brief?