When planning a conference the design and colour of the staging and set lighting is often dictated by the company theme colours. Though an obvious thing to do it can sometimes have consequences that are not realised till much later, after the event in fact.

Photography and video at a conference is very much a reportage style of working. What happens has to be filmed or photographed as it happens, there is no second chance, schedules have to be kept speakers who overrun throw delicate balances of timing into complete meltdown, lunch schedules and hot food can be ruined as well as possible overrun charges being caused.

So the photography and videoing of a conference has to be something that happens without interference to the event and must produce results that look natural and engaging for post event publicity.

Normally a good conference set will have good lighting of a neutral balance focused on both the lectern where the main speaker will present from and also on the stage area used for group or panel discussions.

For video work the normal state of affairs is one or two cameras set up on tripods in fixed positions, these will be either connected via a live feed to a mixing desk and piped live back to display screens or direct to a web feed. For smaller conferences the video is sometimes just captured to disc and edited to produce a final product later either for web or archive.

What many people don’t realise is that although the lighting on the main subjects is neutrally balanced (to either a tungsten colour balance or daylight) a video camera can be upset by the back wash of lighting from the general staging and this can have a dramatic effect on the overall colour balance.

The reason for this is that from two different angles the balance between the spots on the speakers and the amount of spill from the coloured stage lighting varies. If the background colour is extreme, very blue or very orange the camera if set to automatic is going to give a very different colour balance dependent on how much of the background is included. This is because any automated system like this can only work on an overall generalisation. The problem is the main subject hasn’t actually changed colour but the camera changing the colour balance of the overall will result in a change of colour balance of the main subject from picture to picture.

The example below shows a distinct colour shift in the neutral greys of the jacket when the background and screen are balanced to match, a result of the effects of auto colour balance by the camera. 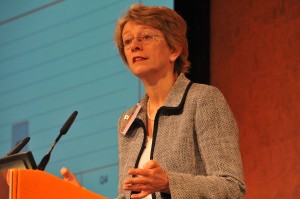 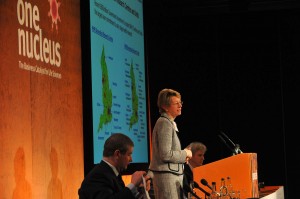 So ideally a photographer wanting to minimise post production work colour balancing pictures needs to set the camera to a fixed colour balance in the same way the video camera has. Unfortunately many photographers today think the camera knows best and will just leave a camera set to auto rather than understanding the reality of lighting temperature themselves. The alternative is overpowering the stage lighting with flash to produce a constant colour temperature. But this kills the nodelling of the stage lighting, adds shadows and can cause screens and backlit projections to be unreadable if not properly balanced with the “natural” stage lighting. Plus of course it’s very distracting to delegates.

As an example let’s look at a conference with a strong orange stage set. The spots on the speakers are tungsten which in Kelvin, which is a measure of colour temperature are somewhere around 3200k  which is strongly down the red end of the colour spectrum compared to daylight balanced which is bluer and is normally agreed to be around 5600k for noon day light.

If you have tungsten lighting in the spots and then a backwash of orange stage lighting the overall light temperature reading at the speakers position is going to increase more towards the red spectrum and drop the kelvin level to much below the 3200k setting for the spots alone. Therefore the colour balance from some angles which will show more of the backwash of the stage lighting will actually show a warmer colour balance in skin tones than a shot taken square on of the front of the face even though this shot will show more of the background colour.

If the camera is set to automatic colour balance in the two above scenarios the resulting two shots will be even more different because the shot taken straight on will see in the screen far more of the orange background so will adjust the balance to a more blue base where as the side on shot will see the face and probably a black unlit background therefore the colour balance will not see so strong a bias in the colour balance and stay much warmer balanced therefore in this situation where the light on the main subject is already too warm skin tones will look very red.

The end result is a batch of pictures where the main speaker might have a blue toned white shirt on in the images taken from the front and an orange toned white shirt on from the side! And so starts the photographer’s postproduction nightmare of trying to produce a balanced set of images so that when the client looks from one to the next there is no jarring colour shifts that become noticeable.

At this point you might say just bring the shirt back to white in both pictures and job done, except adding blue to a too warm image and orange to a too cold image may bring the shirt to neutral white but the introduction of the two different tones will play havoc with the overall colour balance of the background, sometimes causing more of a visual difference than the original.

Few people understand the time and effort that most professional photographers put into post production work. Not only will they start with these colour balancing procedures on many of their images but will often progress on to post cropping for either overall image improvement or alternatively to correct a slight camera tilt relative to straight lines that might have been vertical in reality shown in the image slightly off due to the angle of view.

So when getting a quote from a photographer don’t immediately think their hourly rate is excessive for the time you have him on site, it’s most likely they will be doubling their hours involvement with your job in post production. If you find this article interesting then you may also be interested in my free download “The 543 check sheet for briefing an event photographer”. This can be found at http://www.brd.uk.com/543-briefing .

Good event photography is more of a science than many people realise. Combine this with artistic flair needed to make an interesting image and the timing skills to catch the moment of action and one begins to realise the value of a skilled professional. Like every other highly skilled professional the event photographer will make it look easy but be aware he or she is actually aware of far more aspects of the conference than the delegates and that’s why if you ask any event photographer what had been said by any particular speaker while they have been shooting they will probably have no idea, their brains have been connected to their eyes not their ears!