I got a call last week while I was away motorcycling in Europe to see if I could cover a launch event for the London Stock Exchange. It was a short notice enquiry for the day after I was due back so I was happy to assist, there’s nothing like getting straight back to work on the first day after a holiday.

The job involved the launch of a companies new stock on the markets. And traditionally those involved meet at the London Stock Exchange at the time of the launch for an official launch ceremony and a social event.

In this case it was a Romanian Electricity supplier and attending would be the Romanian Prime Minister and his Energy Minister. Since I hadn’t covered one of these before and they tend to always work in the same manner I was asked to contact their normal photographer to get a run down on the usual flow of events.

This is quite unusual, as most often the client is more interested in giving the brief direct, but in this case they wanted me to produce a product similar to their normal supplier who was unavailable. After a ten minute chat with the photographer while still in Germany I was quite happy that there was nothing out of the ordinary about their requirements and was certain I could match his style for their consistency on this simple launch.

The job was to commence at 7.30am with the stock launch at a ceremony to start at 8am. The client asked me to be a little early to be sure I had the brief correctly in mind and a 7am start had meant a very early departure from home but it did have the advantage of none of the usual London commuter traffic.

Event photography of this nature is very much a case of planning and then being ready to drop that plan and move to react to whatever happens. In this case it was a simple two camera set up function. One configuration for the actual presentation in the main auditorium where screens and displays had to be captured and a second set up in the smaller function room where bounce flash could lift the people from the background a little.

I’d done my research before the event so I knew what both the energy minister and Prime Minister looked like. Although this is not always necessary as it becomes painfully obvious who the VIP is the way people rush around them! But being professional is always trying to be prepared for any eventuality.

When the Prime Minister arrived it was important to stay ahead of his group as he entered the function room to make sure I was correctly positioned to get the first handshakes with the receiving hosts. As it turned out the Romanian PM shook hands with a large percentage of the room and it was important to move as quickly as possible to get everyone “gripped and greeted”. I’m pleased to say I didn’t miss one. 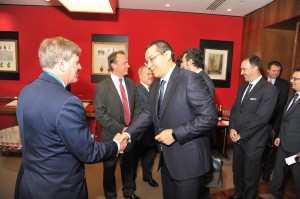 There then followed 10-15 minutes of meet and greet where again any good emotional shot was important to capture, any host who can have a shot of me sharing a laugh with a foreign dignitary always is appreciated.

The next stage was the formal proceedings where again the good event photographer has to be aware when the participants are about to move location and be ready to be ahead of the pack.

I got positioned and reset the cameras to the alternative capture method of high film rating and natural light and was ready for the whole thing in easy time. 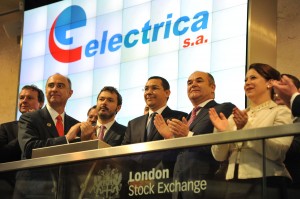 It’s quite sad in this digital age where a new stock launch that might have been traded in the past on the stock exchange floor with all the hustle and bustle of traders is imagined today is a bit of a let down as nothing physically actually happens! All the stock trading is done from computers and at remote offices. There is no shouting, waving of hands and papers and general excitement. But the ceremony is symbolic of it all and gives the client a focus to the whole event.

After the main event of course came the speeches and this was a perfect location to say visually what was going on, the venue name, the guest speakers flag, it was all there. 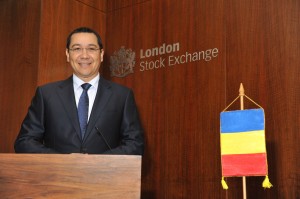 As usual these days the pictures were wanted yesterday so I had to let the client select via my Ipad several images to have uploaded to a Dropbox folder via their office wifi before I left. Then the balance of the pictures were required before the end of the day. I still find it quite strange that because the technology has made it possible to produce results immediately we now have a requirement to utilise not as a benefit but as a necessity.

Job done and client happy I look forward to assisting the Stock Exchange on further events in future.