I’m very privileged in my job. I get to go to some amazing places and get to see close up important and interesting people. It’s one of the reasons why photography and videography are such desirable occupations.

The night before last I had the pleasure of covering the Florence Nightingale nursing day service at Westminster Abbey. It’s a wonderful celebration of thanks for all the dedication of nurses world wide and is embodied in the memory of that most famous of nurses from the Crimean war Florence Nightingale.

This year was particularly poignant being the commemoration of the start of the First World War. So attending this year in the 2000 plus congregation were many representatives from the armed forces.

The day for me as official photographer starts with arrival by 3pm for a 6.30pm service. Was I amazingly early? No, each year the lamp and roll of honor of nurses killed in action is paraded by a different set of nurses and they have to have a practice run through. Also the readers of passages from the bible also have to have a run through so that everyone knows what is happening and the service runs like clockwork.

As I’ve said I am very privileged to do this event and perhaps a testimony to my skills is this is the 18th year I’ve been retained as the Foundations official photographer. But that isn’t to say each year I can go in and just do the same old thing. The director of the charity is always trying to improve their image and that often means changes in the brief. Which is changes in the priority of the images.

This year was no exception. My first meeting with the Director before the practice gave me a request for more informal shots as well as the formal group shots of the main players. Something that the Foundation could use in their annual report that wasn’t so “Churchy” as she put it.

Taking a brief in these sorts of situations a photographer has to be very carful that they have understood the brief. Many clients will make requests for images using mood words. “I want something more exciting” might be an easy request but when someone asks for something that sums up a more “ecological “or “portrays our values” request often needs much more defining as often a client won’t have a clear visual concept in their brain for a mood they want to achieve.

Luckily for me this Director knows what she wants and could simply describe what she wanted to use the images for and where she thought she had a weakness in the coverage from last year so I knew exactly what I was trying to achieve.

Of course knowing what you want to achieve and realising the results is not always so simple but the first stage was easily understood. The problem is there are so many stages of the practice to record that to add extra goals at that time is difficult.

We started with the practice of the parading of the lamp. This is done with a main lamp bearer and two assistants who play a roll in passing the lamp to the Dean of Westminster Abbey at the alter. These three are escorted by a posse of some 20 student nurses.

This practice is photographed as the service never used to be allowed to be covered. But relaxation on those rules means I now cover the actual event as well. But for the event I have to be in one static position. Generally up on the screen so I can see both ends of the Abbey.

I have to share these practice runs with whatever other press photographers turn up so we have to work very cooperatively to all achieve our objectives. Often two or three of us are walking backwards down the nave or running back further to get long shots always hoping the others are not going to get in our shots.

After the main lamp practice there is formal group shots of all those involved, separately for the main characters and in various formats with and without lamp bearers and tutors for the students.

Then its normally straight on to either the practice of the Roll of Honor parade or the separate readers to get close ups of them at their task. This is where a photographer has to be both aware and flexible. As at anytime the order of what gets done next and where in the Abbey can never be predicted. I also needed some more relaxed images of the lamp bearers as well as the formal. 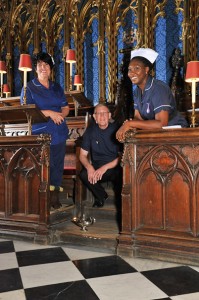 Add to this I also wanted to get in and cover the nurses having tea before the ceremony to get some more of those requested reportage style non churchie images and things can get quite phrenetic. Luckily I had caught a nice set of some of the nurses helping each other with their hats which had a great feel of fun about them but more was needed.

When I got to the nurses tea break an opportunity appeared to set up a fun shot. Two of the nurses were looking at the hats they had been provided with and since there were two male nurses in the procession I decided to see if I could get one of the boys to pose for me having the girls hat tried on him.

This sort of thing can happen easily with the right approach and this is again where I shout the praises of getting a professional photographer involved in your event. They have the skills to make shots like this happen (basically we can talk the hind leg off a donkey!).

This year the ushers were being provided by the US air force, so there again I had another group shot to do even though they had brought their own photographer. This also produced an unusual request, could their photographer join me on the screen for the service? Of course they could, not my permission to give, but nice of them to ask me as well.

Normally a brief before an event would have given me all the most important information needed. But very unusually this time I only became aware during the practice that a very special guest would be attending this evening. The patron of the charity Princess Alexandra. Luckily I’m an adaptable photographer and VIPs don’t phase me at all but it did mean my normal plan of taking my place on the screen before the service started would have to be changed.

In these situations the Royal guest is always last to arrive and last to take their seat having been introduced to all the main functionaries in the proceedings. Being an event at Westminster Abbey it is always the Dean who will greet the VIP at the door and then introduce them to first the main clergy involved in the service and then the heads of the charity and their representatives.

One never knows quite where to stand to get the shot and yet be out of the way if one hasn’t been given a full brief beforehand and I had to move three times as various groups assembled in their designated spots. But it was no problem, I stayed out the way and ended up in the perfect position for the side on handshake once my charity director had taken her official place. 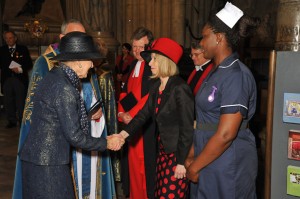 Once the formalities were out of the way it was a simple walk around the outside of the main body of the Abbey and using the back entrance to get up on the screen to take my position for the service. All went smoothly moving from one side of the screen to the other capturing the action as it moved from back to front of the Abbey. 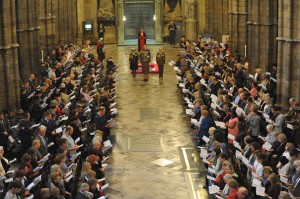 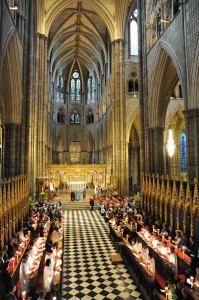 When the last hymn was underway it was back down off the screen and quickly to the back of the Abbey to catch the Princess leaving or talking to congregation members if that happened.

As it turned out she moved straight to the Jerusalem room a wonderfully historic room at the Abbey that is used for drinks receptions etc – well worth Googling the history of the room if you have a spare moment.

Now comes the time when the professional event photographer earns their income. Hen a Royal personage is in an event location everyone wants not only to talk to them but also have a picture taken of that experience. After many years of experiencing these events it’s interesting to see how people hover close by the VIP hoping that they may be next to be spoken to.

I’ve discussed before the importance for the host to know their job when in these situations as a good host will be aware of the photographer and after doing the introductions will step back out of the group allowing an open sit perfect for photography of the rest of the group. The alternative is a closed group, four or five people all standing facing in the VIP so that no matter which side a photographer approaches from he gets someone’s back in the picture. Not the goal at all! 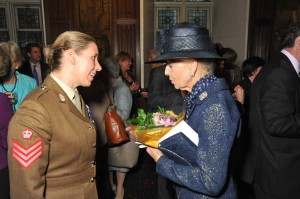 A good events photographer will request that the host does step back prior to the occasion if he has time and knowledge of who is the host. But on this occasion the official host is the Dean and the subject related host is the Director or Chairman of the charity and it soon became obvious to me that no one had spoken to anyone else at this level to organize who would be taking the primary roll. So any chance I might have had of requesting an open side to a group was never going to happen. But again from experience I know if I am polite most people will give me space to take the shots even if it is sometimes a bit of a squeeze.

A further complication on quality events of this nature is hats. We photographers hate hats with wide dipping brims! If natural light shots are not possible, which in a dark paneled room like the Jerusalem room in the evening the light levels are low and produce not very natural colours a bit of flash is needed to both clean colours and add a bit of detail as well as life to the eyes.

But add a wide brimmed hat and deep shadow can thrown in the upper half of the face of the wearer as well as possibly on to anyone standing close behind. He answer is a balance of flash and natural light, controlling the natural light with the time exposure and the flash with the aperture that reduces the shadow detail but there are limits, too slow an exposure and you can get movement blur after the flash has fired leaving a trail. Too fast a film speed setting and the flash may not be able to be reduced in power enough. 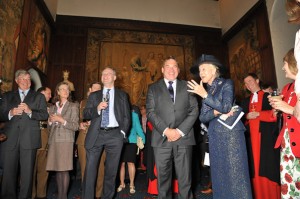 For an hour or so I was the busiest person in the room. Moving around groups and from group to group always trying to anticipate where the next best shot may be taken from. It’s hard work and by the end I was gasping for liquids!

At the end of the day and reviewing my images I think I got the right balance of reportage to formal event coverage, I feel I captured what I needed of the event. In a couple of days I will hopefully get the feedback that confirms the client was happy too!