Being a corporate photographer covering everything from Directors portraits to conferences and events as my speciality one might assume that my passion for photography might be tainted and once away from the job I would leave cameras and picture production alone.

But sadly nothing is further from the truth and my interest in pictures plus my photography skills has been a big advantage in one of my other hobbies – family history research.

I started a couple of years ago when I came across a huge pile of old pictures at my parents house. Like most peoples photo collections there was no markings to say who the people were on the back of many of the pictures because we all assume that because we know who is in our own pictures everyone else will too.

Researching old photographs can become a really intense obsession. It’s amazing that once you have done your family tree on line back 3-4 generations you have the ammunition to be able to start working out who some of the images might be of.

For example originally I had no idea that my grandfather on my mothers side had any brothers and sisters. He had died many years before I was born but having confirmed the number and names of his brothers and sisters on the family history research and got an impression of their relative ages I was able to work out which people in family groups were related to who by cross referencing pictures. And once one or two fall into place it’s possible to work out others.

I discovered a local newspaper article that told of the death of my grandmothers brother, it included a picture and mentioned he had been involved with the local village band. I remembered some old band pictures in the collection I had and with the new information I was able to work out that the band pictures included him and what’s more a picture of my three people previously only important because it included my grandmother as a young girl could now be pretty certainly pinned down to her, her brother killed in the first world war and what had to be her younger sister. 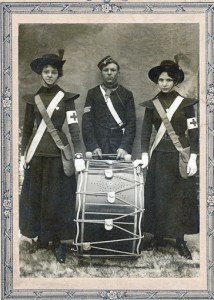 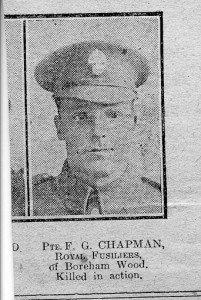 Each step leads to another step. So if you inherit a large selection of family pictures don’t just throw them away after first inspection because you have no knowledge of who they might be. Get your family tree sorted and then start cross referencing the two, you’ll be surprised at how soon first one then another will identify themselves especially if you are lucky enough to find someone else with a family tree online that includes some of your ancestors, all of a sudden you can get information and clues to get the answers you need.

As I said I’m very lucky that the hobby has resulted in a lot pictures coming my way. That combined with my interest has resulted in me now accurately having been able to identify images going right back to my Great Grandfather and grandmother. I can put faces to the tree and I now feel I have a true contact to the past way before I was born.

So never throw those old pictures away, if you can’t be bothered to do the family tree research give them to someone who might! Next blog I’ll talk about restoring old pictures with the simple digital tools we all now have.